It’s been a while since we spoke. Anything new in this country of ours? Something seems…different. It’s certainly not a more perfect union – or any greater, so far – so just remember to be your brother’s keeper.

Here at JDF Headquarters, I’ve been quietly productive. Last year, I wrote and recorded the soundtrack for the upcoming film Abundant Acreage Available, starring Amy Ryan and directed by Winston-Salem’s hometown hero Angus MacLachlan. It will have its world premiere at next month’s Tribeca Film Festival.

Elsewhere in the ever-swinging world of Show Biz, several of my songs, both new and old, were featured in TV shows (“Maron,” “The Fosters”) and in the latest Ang Lee film, Billy Lynn’s Long Halftime Walk.

Our good friend, the terrific artist Alex Klein, has been secretly working on a short film featuring two songs from The Arrow. The final project will be released this spring, but in the meantime, here’s a teaser pic. 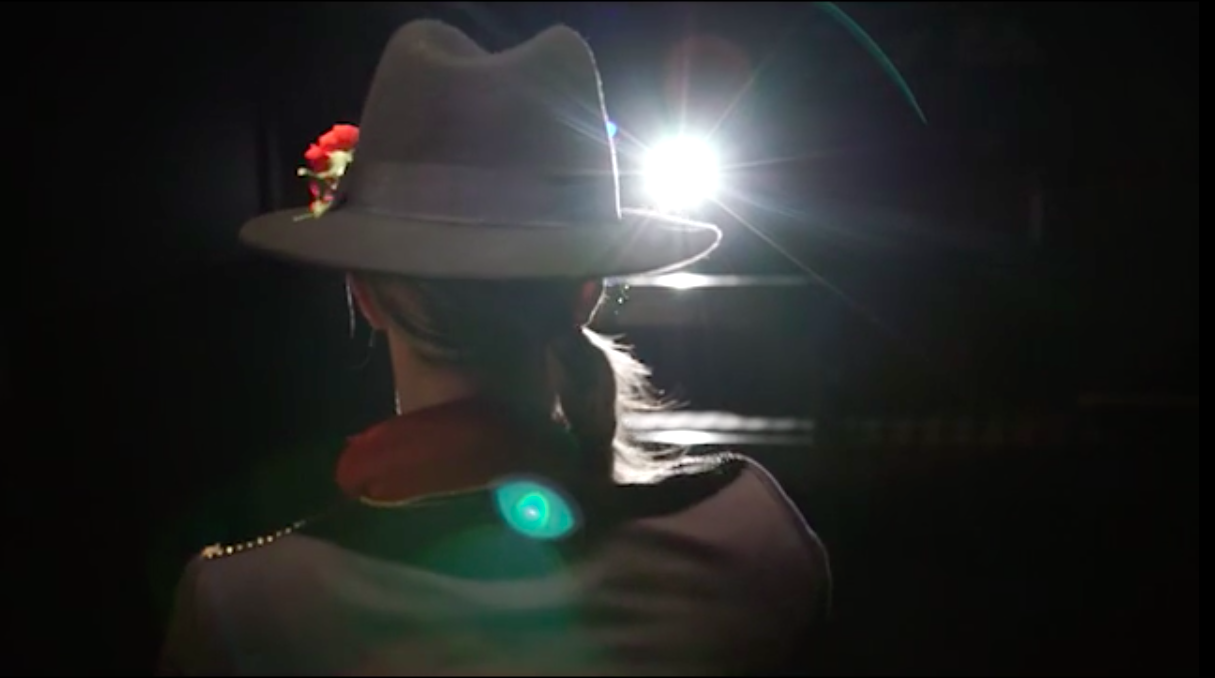 My ultra-fine publishing company, Rough Trade Publishing, is doing its part to combat the looming uncertainty of 2017 (so far). It is offering “A Song a Day to Keep the Pain Away,” a 90 song compilation of Rough Trade artists that can be yours for the nifty low price of $20.17. All of the proceeds are being donated to the Southern Poverty Law Center; so far, they’ve raised more than $6,000 for the cause. Amongst the other top flight acts, you’ll find an unreleased JDF song that was recorded during The Arrow sessions.

In more tangible news, Winston-Salem’s conceptual rock entertainers The Vagabond Saints Society will be performing an evening of Electric Light Orchestra music at The Garage on Saturday, March 18. There are two shows (7 p.m. and 10 p.m.) and I’ll be doing my best on several Jeff Lynne songs throughout the night.

Finally, I’ll be playing The Barn at Reynolda Village on Thursday, April 27 as part of its “More Barn” sessions. The Dead Tongues (Ryan Gustafson) is also on the bill, and it should be a cool evening, with both of us playing solo, 100% singer and songs. Spread the word – and bring your pals.

Another summer is almost over, but the temperatures are still high, on the campaign trail and on the streets of Charlotte. Trying to stay cool is easier said than done, right? Take the high road, friends.

I’ll be playing several shows in the next few weeks. On Saturday afternoon, I’ll be gladly lending a hand at the latest Stand Against HB2 show at the Neighborhood Theatre in Charlotte. There are a lot of great bands and performers who are all doing what they can in this ongoing fight for equality.

On Friday, October 7, I will be at Heyday Guitars, Winston-Salem’s hip new joint for laid-back, house party-type shows. They sell nothing but cool guitars and gear and it sounds great in there. I’ll be playing alongside Lemon Sparks that night.

On Sunday, October 9, I’ll be at the Steel String Brewery in Carrboro, with my old pal Sara Bell. She was once part of my band, and I did a stint with her cool band, Regina Hexaphone. We’ll play from 4 p.m. to 6 p.m. that afternoon.

Ian Hunter is one of the great songwriters of the last 40 (!!!) years, but he keeps getting better and making smart rock records. On Friday, October 28, I’ll be supporting him and his Rant Band at the Cat’s Cradle in Carrboro. I’m pretty pleased about this and hope you’ll be able to come out and have fun with us.

Stay tuned for more music, and by all means, get out and vote in November. This world is spinning faster by the day; hang on, friends.

If you’ve ever wanted to see a tremendous singer-songwriter who plays piano like the child of Elton John and Professor Longhair, then this is your lucky Saturday. My friend Beth McKee will be playing tonight at the Muddy Creek Music Hall, along with a deep groovin’ drummer and a multi-instrumentalist. She has been nice enough to invite me to join them for a song or two, so I’ll be the one who’s trying to keep up.

The show starts right at 8 p.m. For tickets and more info, click here.

We had a great time playing for an even better cause at the Stand Against HB2 show at Haw River Ballroom last month. The benefit – which supports and raises money for EqualityNC – was such a success that we’re doing it again in Winston-Salem.

The next Stand Against HB2 concert will be held on Sunday, June 26 at the Millennium Center in downtown Winston-Salem. Advance tickets are available through this link and tickets will also be sold at the door. All ticket proceeds will be donated to EqualityNC and QORDS. Hope to see you there!

No Depression added our song “Young Tigers Disappear” to its list of politically charged tracks (including “What’s Goin’ On,” so we’re in good company) that you “probably won’t hear at a Clinton or Trump rally.”

Check out the rest of the list – and the interview with Peter Case that preceded it – here.

Jeffrey Dean Foster has released his newest music video for the track “Young Tigers Disappear,” the latest single from his critically acclaimed album The Arrow.

“I think that the big view of the song could be heard as anti-war, but the zoomed-in, micro view is about the old and rich sending the young and poor out to fight their wars,” Foster explained. “It has happened forever. It’s been a while since one of our leaders was actually out front, leading the charge on a horse.”

The video for “Young Tigers Disappear” was directed by documentary filmmaker Tom Green, who echoed Foster’s sentiments. “I think in today’s extremely polarized political environment, it’s good to envision how we can avoid conflict rather than enflame it,” Green said. “I wanted to do a video that was true to the anti-war message of the song, but also true to Jeff’s kind spirit. If we could all learn to express our opinions through art rather than divisive speech, I think we’d all be better off.”

In addition to Green’s talents, the video also includes Civil War re-enactors representing the 28th Regiment NC Troops and “40 kids with sticks,” who were all recruited through local drama organizations.

“After I wrote the song, I started to wonder if it was too topical, explicit or even obsolete,” Foster said “Sadly, it seems like it won’t be obsolete for years to come.”

When people ask me what kind of music I make, I usually say ‘just some combination of Hank Williams and David Bowie,’ and I’m totally serious. I’ve never gotten close to either of those guys’ artistry, but I’m so glad that I soaked up that kind of beauty in my life. I gave this cover of “Ashes to Ashes” a shot during last weekend’s show at Muddy Creek Music Hall, as a way of saying thank you, David Jones. Thank you.

“Don Dixon has had a hand in virtually every record Jeffrey Dean Foster has ever made — even when he wasn’t invited. ‘I opened the door and there was Dixon,’ Foster said over ginger ales at Single Brothers. “He just showed up. He said, ‘I’m here — what do you want me to do?’”

– Eddie Huffman was nice enough to interview me for Relish, where we talked about my longtime musical partnership with Don Dixon, our collaborations on The Arrow and why he deserves a lot of the credit for that Pinetops record. You can check out the whole article HERE.

Don Dixon will be opening for The Yes Men and me at The Garage on Friday, August 27 and then, two nights later, I’ll return the favor and open for his Jump Rabbits at The Evening Muse in Charlotte on Sunday, August 29.

Thank you to everyone who came out to The Garage on Saturday night (and thanks to Amigo for pulling me onstage for “Rockin’ in the Free World”) and those who made it to the Cat’s Cradle in time for Steve Forbert’s opening act (and a thank you to my longtime pal Lynn Blakey for joining me).

I’ll be back at The Garage on Friday, July 17, singing some Springsteen as part of the Vagabond Saints Society’s “Because The Night” show, a full-on, two-part tribute to New Jersey’s finest export.

And just a reminder that the Yes Men and I will be back at The Garage with Don Dixon on Friday, August 28 and then swapping places on the bill on Sunday, August 30 when I open for him and his Jump Rabbits at The Evening Muse in Charlotte.

Hey folks, I have some late-breaking news for you all. I will be opening for Steve Forbert at The Cat’s Cradle Back Room this Sunday evening, July 12. Steve is one of the best songwriters on the planet, a completely original singer and his Alive On Arrival record is one of my all-time favorites.

Showtime is an early 7 p.m. and tickets are available by clicking here. Spread the word and, as always, I hope to see you there.